Myanmar’s zero-infection record during COVID-19 outbreak was broken with its first confirmed case on Monday. The country’s healthcare ministry announced that two cases were imported from the US and the UK.

During his visit to Myanmar in January, Chinese President Xi Jinping held talks with Myanmar President U Win Myint, stressing the importance of the “Paukphaw” (fraternal) friendship between the two countries.

Myanmar donated 200 tons of rice to China to support its battle against COVID-19. China is also taking actions in supporting Myanmar.

What is Myanmar’s prevention work? How has the Chinese Embassy to Myanmar responded to help Chinese nationals in the country? What assistance has the embassy provided to Myanmar? The Global Times reporter Li Sikun (GT) interviewed Chen Hai (Chen), the Chinese Ambassador to Myanmar, on Tuesday. 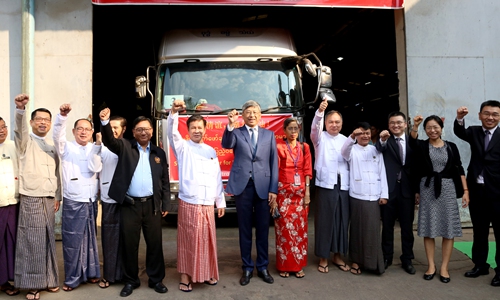 Myanmar donates 200 tons of rice to China in support of the nation’s battle against COVID-19 on March 1. Photo: Courtesy of the Chinese Embassy to Myanmar

GT: Myanmar’s Ministry of Health and Sports announced the confirmation of the country’s first two cases of COVID-19. Since March 21, the Myanmar government has reproposed the Yangon Boxing Ring into a temporary medical facility to quarantine, observe and treat infected patients if the COVID-19 becomes a critical outbreak in Myanmar. What is your analysis of Myanmar’s current situation?

Chen: Myanmar has paid close attention to preventing and controlling the COVID-19 outbreak. As early as on January 30, the Myanmar government founded a central commission on COVID-19 prevention and upgraded it into a national-level central commission on March 13. The commission is led directly by Myanmar State Counsellor Aung San Suu Kyi.

The commission held several meetings to research and deploy prevention work, publishing related information every day. It has also been applying powerful measures to face the risk of an outbreak, such as designating certain hospitals, canceling public gathering, rebuilding arenas and temples as temporary quarantine locations and setting up a financial foundation for the COVID-19 outbreak.

Myanmar also has applied various measures to avoid or reduce the risk of imported cases.

We have also been paying close attention to Myanmar’s prevention work. After the two cases of COVID-19 were confirmed on March 23, the Ministry of Health and Sports published the information quickly, and traced the patient’s travels, which is good for social prevention efforts. Meanwhile, as a less-developed country, Myanmar faces great pressure in quarantine, testing and treatment, needing multifaceted support.

China has gathered experience in confronting the COVID-19 outbreak and is sharing its experience and measures with Myanmar, as well as providing medical supplies. We will continue providing support to Myanmar to contribute in the fight against the outbreak, maintain global and regional medical security and work together with Myanmar. 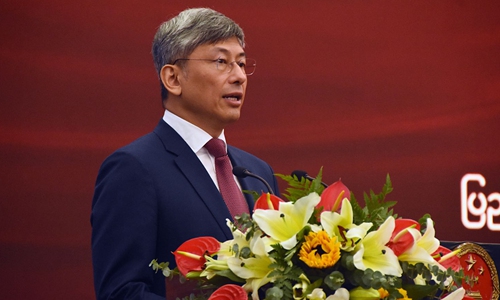 GT: What assistance will the embassy provide to Chinese working and studying in Myanmar?

Chen: The Chinese Embassy in Myanmar closely follows the updates of the epidemic in Myanmar, and maintains close communication with the Myanmar foreign ministry, the Ministry of Health and Sports, and other medical institutions. We have established a hotline for keeping efficient communication and sharing information, so as to fully protect the health, legitimate rights and interests of Chinese citizens in Myanmar.

The Chinese Embassy in Myanmar established a consultation mechanism with the Chinese Consulate-General in Mandalay to enhance coordination. In addition, the Chinese embassy and consulate also worked with the government of Southwest China’s Yunnan Province to strengthen communication and coordination with Myanmar on preventing and controlling the epidemic areas along the border.

I have worked with other diplomats at all levels of the embassy and kept in touch with Chinese-funded enterprises, Chinese students and other Chinese in Myanmar.

On March 24, I conducted exchanges with representatives of Chinese students from University of Yangon and Yangon University of Foreign Language to learn about their difficulties in studying and living in Myanmar. I also presented them information and resources on epidemic prevention and control to encourage students in Myanmar to strengthen their awareness against the virus while they continue their studies.

The embassy paid close attention to the operation of Chinese-funded enterprises in Myanmar and coordinated prevention and control efforts with them, especially in guiding the staff and their families to protect themselves based on scientific protocols. The embassy also helped Chinese employees with visa extension and other issues.

To mitigate the negative impacts on enterprises’ productivity and operation, the embassy has strengthened coordination with the Myanmar government to alleviate the shortage of raw materials for textile enterprises, help them navigate operating difficulties, and ensure employment opportunities, as well as economic and social stability in Myanmar. The measures include efficient coordination with domestic departments and enterprises to speed up the resumption of work and production and speed up the customs clearance process.

We also are guiding Chinese enterprises to fulfill their social responsibilities and donate needed supplies to the Myanmar government and civil society.

We provide common knowledge of epidemic prevention and emergency response measures to Chinese people in Myanmar by phone, mail and contacts of consular volunteers.

It is hoped that all Chinese citizens in Myanmar pay attention to and timely read relevant information on epidemic control, to enhance their awareness and take effective measures to ensure their safety and health.

We advise them to minimize unnecessary international travels and avoid putting themselves and others at risk.

Chen: The current global epidemic situation remains complex and grave. A number of provinces and cities in China have taken measures to isolate foreigners for 14 days at their own expense.

The outbreak has just emerged in Myanmar, so we will closely follow the development of the epidemic and timely inform relevant domestic authorities.

At present, we have not adopted any new immigration control measures for Myanmar citizens. If there are any new measures by the domestic authorities, we will issue an immediate response.

GT: The Chinese Ministry of Foreign Affairs said that Chinese enterprises have donated materials to 20 countries including Myanmar. Will China aid Myanmar’s fight against the pandemic now that the Myanmar has its first confirmed COVID-19 case?

Chen: China and Myanmar share a common destiny. A virus does not have a nationality. The Chinese government has handed more than 2,000 novel coronavirus test kits, lab agents, electric thermometers and antimicrobial wet tissues to the Myanmar side. More materials including hemispherical thermometers, N95 face masks and surgical masks are expected to arrive soon.

Many Chinese enterprises including the Jack Ma Foundation have donated some protection and testing materials. The embassy is coordinating to send medical aid teams to Myanmar. The Chinese side is willing to play an active role to fight against the pandemic according to Myanmar’s needs.

GT: What assistance did the Myanmar government provide China during China’s fight against COVID-19? How does such aid help the development of the bilateral relations between China and Myanmar?

People from different parts of Myanmar donated money and materials to China. People shot musical videos and projected “China, keep fighting; Wuhan, keep fighting” on the landmark buildings in Myanmar to support China’s fight against the pandemic, which will be long remembered.

Chinese President Xi Jinping visited Myanmar at the beginning of 2020, achieving historical results. Chinese and Myanmar leaders agreed to build a China-Myanmar community of shared future. Bilateral relations between the two countries have entered a new era. China’s and Myanmar’s joint efforts to fight against the pandemic reflect the “Paukphaw” friendship and the spirit of community of common destiny between the two countries. China will work together with Myanmar to coordinate and promote bilateral cooperation and push China-Myanmar relations forward.