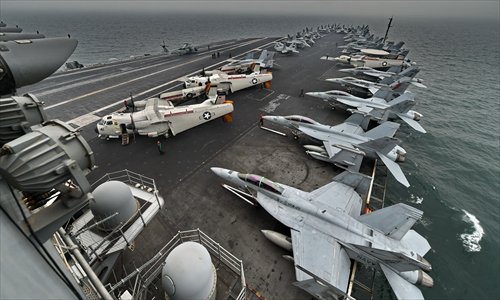 Despite eight confirmed COVID-19 cases on US aircraft carrier Theodore Roosevelt and fast increasing number in the US military across the world, the US on Wednesday reportedly sent a warship through the Taiwan Straits.

Sending a warship through the Taiwan Straits at any time is seen as a provocation to Beijing but doing it now  when Washington faces greater challenge to contain the COVID-19 seems especially reckless, analysts said.

The US has been continuously taking negative actions on the Taiwan question including sending warships through the Taiwan Straits, which heavily interrupts China’s internal affairs, sabotages peace and stability in the Taiwan Straits, poisons ties between the two countries and the two militaries, and releases wrong signals to Taiwan secessionist forces, which are very dangerous, said Chinese Defense Ministry spokesperson Ren Guoqiang at a regular press conference on Thursday.

The People’s Liberation Army has the firm will, full confidence and enough capability to defeat any secessionist activities and safeguard national sovereignty and territorial integrity, Ren said.

The US military should focus on its own COVID-19 epidemic control work, because things are not looking good for them, a Chinese mainland military expert who requested anonymity told the Global Times on Thursday.

The Pentagon announced 53 new cases of US military service members on Wednesday, bringing the number to 227 worldwide, forcing US Defense Secretary Mark Esper to issue a stop movement order on Wednesday to the US military and halt all travel and movement abroad for up to 60 days, Reuters reported on Thursday.

Another possibility is that the US destroyer was on its way back to base due to this stop order, but even so, it could send a wrong signal of encouragement to Taiwan secessionists, the expert said.

The McCampbell‘s transit through the Taiwan Straits came at a time when five additional sailors aboard the US aircraft carrier Theodore Roosevelt, also deployed in the Pacific, have tested positive for the coronavirus on Wednesday, making the total number now eight, US media outlet the Hill reported on Thursday.

Warships have tighter spaces and less comfortable living conditions than a civilian cruise ship, and staying in a confined space for too long will risk aerosol transmission as the virus density could be very high, warned Wang Peiyu, deputy head of Peking University’s school of public health.

Another military expert who asked for anonymity told the Global Times that Theodore Roosevelt is not just an aircraft carrier, but a representation of US’ power. If the epidemic becomes a large scale one, it will not be just the carrier, but the entire fleet, the entire US Navy, and the US’ image as a strong military power will be damaged, the expert said.