The academic of the Chinese Academy of Engineering had been working there for more than 50 days as a member of the expert group of the Central Leading Group on Responding to Novel Coronavirus Disease Outbreak.

Zhang arrived in Wuhan on January 27. “For the first nights, I could not sleep well, as the situation was worse than I imagined.” He was anxious of the hospitals being filled with patients in Wuhan.

On February 3, the first batch of a thousand patients began to take TCM, and several days later, the number reached 30,000.

Only after one or two days after taking TCM, the fever of some patients with mild symptoms were brought down.

To answer the central government’s order to receive all patients in the hospitals, the central leading group made a strategy to apply classified administration to different patients and scientific treatments. Therefore, the patients with mild symptoms were sent to Fang Cang makeshift hospitals, and those with severe symptoms to designated hospitals.

Zhang and Liu Qingquan, director of the Beijing Hospital of TCM, appealed for TCM to be used in the makeshift hospitals, which was approved by the central leading group. The Jiangxia Fang Cang Makeshift Hospital that used TCM treatment was founded.

Zhang recalls he was working an overloaded schedule round the clock. However, on February 15, a severe abdominal pain hit him, and he self-diagnosed that his cholecystitis was the problem.

The leader of the central leading group urged Zhang to be hospitalized. The expert in charge of treatment said adamantly: “It can’t delay any more, you must have an operation right now!”

Zhang underwent a minimally invasive gallbladder removal in the early hours of February 19. The operation was successful, but after the operation he developed intermuscular thrombosis in both legs and had to stay in bed.

“The doctor said I have to keep my legs straight and stay in bed at least two weeks. I couldn’t lie down for recovery, as fighting against COVID-19 was the most important task,” Zhang said.

Just one or two days after the operation, Zhang began to work in his ward, with a small table on the bed. He modified files with a pen in right hand, with intravenous needles in his left arm. Zhang instructed the treatment working in Fang Cang makeshift hospital by telephone.

On the third day after the operation, he returned to work as usual and only went back to the hospital for fluids at night.

“When there is a plague, the doctor is the soldier. Better to owe oneself than to owe  the people!” That was Zhang’s pledge 17 years ago when he fought SARS.

In 2003, Zhang stepped forward during SARS epidemic. “SARS was a special ordeal. It tests both our spirit as a member of Communist Party of China and the ability of TCM to treat diseases,” he said. 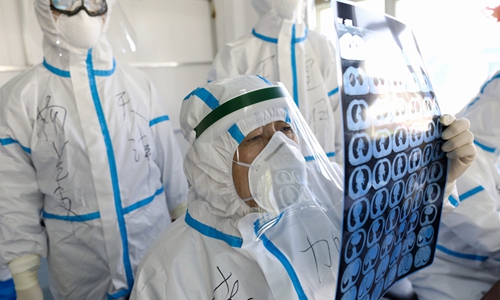 Zhang was the TCM general commander against SARS in Tianjin, and he proposed to set up two TCM red zones.

At the same time, according to his clinical experience, Zhang edited the first 100,000 words of SARS Guide in China which printed tens of thousands of copies, and mailed them to the red zones of each province.

Their experience was included in the TCM treatment plan for SARS issued by World Health Organization, and they won the second prize of National Scientific and Technological Progress Award.

The experience of establishing the red zone at that time was applied to the TCM Fang Cang makeshift hospital.

“During the SARS outbreak, TCM was involved in the second half. More emphasis was placed on the role of TCM, from the central government to the health administrative departments at all levels. TCM has changed from a participant to a main force fighting against COVID-19 alongside Western medicine,” Zhang noted.

For now, the domestic outbreak is initially under control, but the global pandemic is raging. As of 6:30 pm on March 30, a total of 718,685 COVID-19 cases have been confirmed globally, and the outbreak has affected 200 countries and regions.

“The experience of integrating Chinese and Western medicine treatment is one of the highlights of the Chinese treatment strategy,” Zhang noted.

“TCM has been proven to solve some major health problems. It is a blessing for the Chinese people that TCM and Western medicine complement each other and work together to treat patients. Good developments should also serve the health of all people around the world,” he said.

To better introduce the experience of using TCM to tackling the COVID-19, Zhang recently communicated with many overseas doctors through online video chatting.

On March 26, as the main speaker, Zhang shared the experience with 64 countries and regions in a global online meeting held by World Federation of Chinese Medicine Societies. A total of 90,000 participated the event.

“We would like to share our experience with the world and our university is also introducing the achievement of TCM in tackling the outbreak through overseas students and alumni,” Zhang said.

Organizations and institutes in China has donated TCM products and devices to more than 10 countries in the world. TCM experts have been dispatched to Italy, Cambodia and Iraq as members of expert team to help tackle the virus.

In Zhang’s view, for TCM, the epidemic is an opportunity. Making TCM international first calls for an international standard, and the technology serves as a foundation. “We should do our work well, so that TCM could be more widely used.”