A resident living in Haidian district arrives in Beijing from Hubei Province on Wednesday and gives a victory gesture after getting off the train. Photo: Li Hao/GT

More than two months away from the city where they live and work, more than 200 people from Hubei Province finally returned to Beijing, when the country is close to winning the war against COVID-19. They will be followed by hundreds of thousands in the coming months who will return to the capital from hard-hit Hubei.

Special bullet trains slowly approached the Beijing West Railway Station Wednesday afternoon, bringing back more than 800 passengers, including more than 200 who have been stuck in Hubei for almost two months due to COVID-19.

When they got off the train, the passengers were met with Beijing community officials at the platform picking them up, and boarded buses and were taken to districts where they live. They have to remain isolated, either at home or in quarantine locations, for another 14 days.

All the passengers on the trains had their temperature taken five times during the journey, including twice on the trains.

A passenger from Huangshi surnamed Feng is excited about finally coming back to the city where he works and lives. He shared his concerns about the potential to get the cold-shoulder from neighbors in Beijing. “We must behave ourselves first by obeying the rules of home isolation, to avoid any unnecessary unpleasantness.

“Most people are nice and polite. I don’t think people from Hubei are unwelcome in Beijing, but people are worried about the growing number of imported cases from overseas,” he said.

Hubei has about 6 million residents working outside their home province. Among them, 70 percent returned to their hometowns in Hubei for Spring Festival holidays in January and have been stranded there. 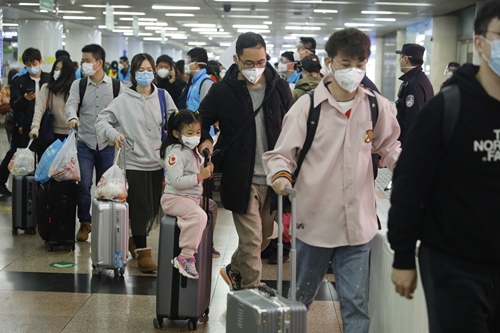 A little girl sits on the luggage of her father as they and hundreds of people who have been stuck in Central China’s Hubei Province for two months arrive at the Beijing West Railway Station on Wednesday. Photo: Li Hao/GT 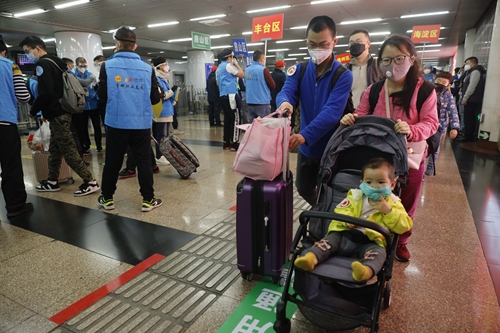 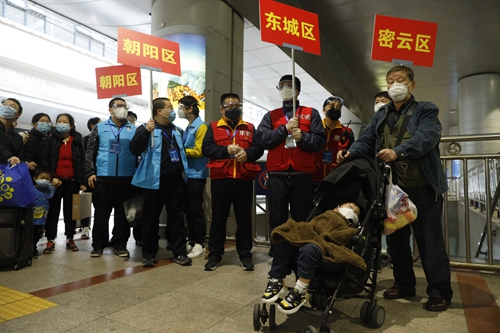 Staff from different districts of Beijing wait for passengers on the platform of the railway station. Photo: Li Hao/GT