Doctor, intellectual, technological official, truth-teller, member of the Chinese Academy of Engineering, deputy to the National People’s Congress, and hero during the fight against SARS and the novel coronavirus. These are the labels on Zhong Nanshan.

Zhong won fame and people’s admiration in 2003 during the nation’s fight against SARS, and 17 years later, he stood between the epidemic and the public, once again.

On January 18, 84-year-old Zhong Nanshan hopped on a train to Wuhan of Central China’s Hubei Province although he suggested the public “not go to Wuhan unless for a special purpose.”

His assistant said he took a nap after he finished reading a document.

On January 18, he received a notice during a meeting with the health commission of South China’s Guangdong Province and headed to Wuhan. The next morning, he swiftly went to the hospital receiving infected patients and later to Wuhan’s disease control center for field investigation.

Without any break at noon, he attended a meeting in the afternoon till 5 pm and then boarded a flight to Beijing to brief the National Health Commission before returning to the hotel at 2 am.

After a short sleep, he got up at 6 am to prepare for telephone conferences, a press conference and media interviews, reported the Global People magazine.

A joke circulated online during the epidemic that “No one should go out until Zhong Nanshan said you can,” which reflects Chinese people’s trust in him.

The trust has existed for 17 years, going back to when Zhong told the public about the facts on the SARS virus.

In December 2002, The First Affiliate Hospital of Guangzhou Medical University received the first SARS patient. Soon the epidemic broke out in Guangzhou, capital of Guangdong Province.

“Send critically ill patients to me,” Zhong said when the medical staff became restless and the virus was still mysterious.

In the beginning of SARS, some authoritative medical personnel believed the virus was chlamydia and treatable via traditional treatment. However, Zhong believed it to be a variety of coronavirus.

Several days later, Zhong’s research was recognized by the World Health Organization. It was his insistence that helped understand the situation.

At a press conference held on April 4, 2003, Zhong pointed out that the epidemic was far from being controlled as there was still no clue about the cause of and treatment to the disease.

He once said his words might embarrass others in the public health sector, but he had to tell the truth. “I think patients’ lives are the most important thing,” Zhong wrote in his autobiography.

Zhong said his father had told him to speak the truth ever since he was a child.

“My father influenced me greatly since his words and behavior were evidence-based,” he recalled during a media interview.

A calligraphy script reading “Dare to practice, dare to talk” in Chinese characters has been hanging in his office.

Zhong was born in a medical family in 1936 in Xiamen of East China’s Fujian Province. His father Zhong Shifan, a famous pediatrician and epidemiologist, was enrolled to China’s top medical university in the 1920s and got his doctoral degree in the State University of New York in the 1930s, according to media reports. 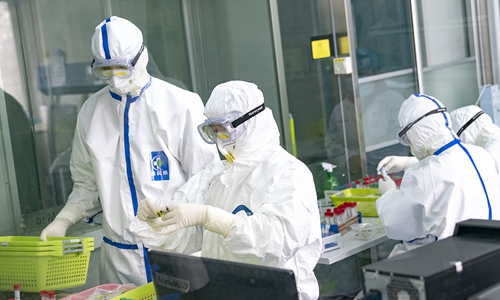 On January 20, four days before the eve of the Spring Festival, when more migrant workers embarked on their trips to go home, a medically authoritative vocal affirmation was urgently needed to tell people whether the virus could transmit among human.

“According to the materials obtained so far, the novel coronavirus pneumonia must have human-to-human transmission, since two patients in Guangdong Province had never been to Wuhan but became infected after their family members came back from Wuhan. So, the disease for sure has human-to-human transmission,” Zhong said at that night in an interview with the China Central Television.

The interview has been spread on various media outlets and social media platforms. It was from that day when people started paying more attention to the epidemic, wearing sanitation masks.

Ever since then Wuhan has gripped the hearts and minds of much of the general public.

Zhong also sobbed and said with a hoarse voice that “with the help of the entire country, Wuhan can survive this difficult time as it is a heroic city.”

On February 2, when his research found that the novel coronavirus survives in feces, the public was concerned once again. Zhong warned that the problem should be paid great attention to since people still use traditional commodes in some provinces.

People’s Daily commented that 84-year-old Zhong Nanshan is professional as an academician, brave as a warrior, and has the great sense of responsibility of a state official.

In the backdrop of great fame and high reputation, he said that “I am nothing but a medical worker.”

He has expressed sympathy to the medical workers fighting on the frontline of epidemic control.

On Tuesday, Zhong shed a tear during an interview with Reuters when talking about the late doctor Li Wenliang who was one of the eight initial people to warn the public the novel coronavirus was contagious.

Medical waste strictly processed in Wuhan amid the COVID-19 epidemic