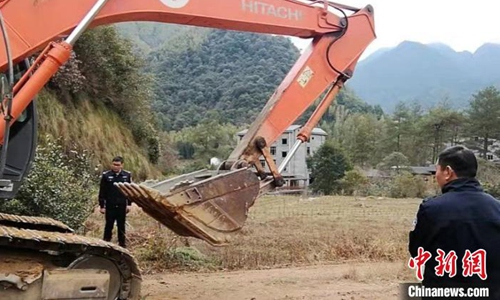 Officials with the Wuyi Mountain National Park in East China’s Fujian Province responded on Sunday to accusations that Nongfu Spring, a Chinese mineral water company, had damaged parts of the forest.

Media reports that the water company had destroyed certain areas of the park after carrying out unapproved construction, went viral Saturday evening, triggering public anger directed at the company and national park.

Wuyi park officials released a statement on its WeChat account that said the area where the company extracts water was not inside the protected area but “more than 50 meters away from the park’s boundary.”

It was confirmed that Nongfu Spring was building a pathway for construction development in the forest that was also close to the water extraction area.

“But the pathway was built in October 2019, when its surrounding area had not been included in Wuyi Mountain National Park,” according to the statement, adding the Fujian government closed the forest around the water extraction point on December 25, 2019, two months after the pathway was created.

Park authorities said an investigation was launched in November after accusations emerged the company had destroyed areas of the forest.

Further details and updates on the investigation have yet to be released.

Programmer suspended for claiming language adapted from Python was original