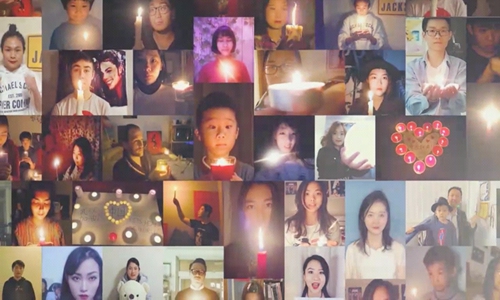 “There are so many things in the world today that are tragic and unexplainable. The most current is coronavirus that has taken many lives…But this is just not a problem for China. This is a problem for the entire world. This is why we all need to come together as onebecause every life that’s lost is a loved one no matter where they fall in the world. But if we come together as one, we can fight this horrible virus and harness it and stop it from spreading,” says singer Jermaine Jackson, brother of the late pop idol Michael Jackson, at the beginning of a new music video for “Heal the World.”

The music video released Friday, dedicated to people everywhere who are fighting against the COVID-19 outbreak, was a collective effort by Michael Jackson fans around the globe. Launched by the Michael Jackson Chinese Fanclub, more than 100 fans, including a score of fans from countries like the US, Spain, Brazil, Russia and India sang in the video.

US director and choreographer Vincent Paterson, who has collaborated with Jackson and Madonna on various projects, shared a poster for the video on Facebook.

“Rene Lamontagne [Paterson’s husband] and I were truly moved by the spirit of love…not about singing great, but about love,” he wrote.

Since the outbreak of COVID-19 in Wuhan in Central China’s Hubei Province, Chinese Michael Jackson fans have been proactively helping the city by organizing online donations and sending as many as six tons of much needed disinfectant supplies to hospitals in the city. In addition to donations, they have also shown their support and love through a “Singing for Healing” campaign launched in early February.

“We know Michael [Jackson] would always reach out his hand to help during any difficult time and crisis. He was not just an entertainer, but also an artist with a big heart, a humanitarian…So we decided to carry on his legacy and organize an online mass singing performance – a cover of his most-loved anthem ‘Heal the World,'” Zhang Rui, president of the Michael Jackson Chinese Fanclub and better known as Keen, told the Global Times on Sunday.

In addition to “Heal the World,” Zhang also invited eight professional singers to sing “Smile” as part of the campaign. The Charlie Chaplin classic was among Jackson’s favorite tunes, and he recorded his own version for his 1995 album HIStory.

“We smile, not because of ignorance. We choose to brave adversity with a positive attitude. Let meaning of life bloom in smiles,” reads an article posted on the Michael Jackson Chinese Fanclub’s WeChat blog.

Chinese singer Ding Chen, who goes by the stage name Tinckson, is one of the eight professional singers. He has been quarantined at home in Wuhan for nearly two months now.

“As a Wuhan resident, staying in is probably the best contribution I can make to fighting the virus. I haven’t felt fear during this period. Compared to people who have been on the frontlines, I have nothing to be afraid of…I will cherish life more and try to better learn when to hold fast, when to let go and always face life with optimism,” said Tinckson. 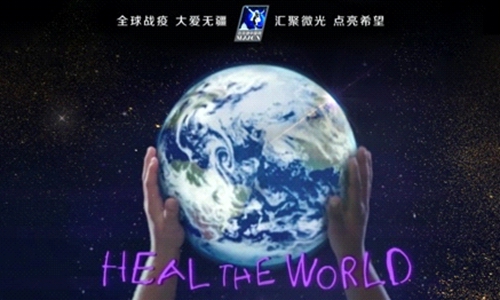 Sing for the world

Hundreds of fans applied to join the performance of “Heal the World.” One-by-one online auditions and back-and-forth communications with the selected singers took up a lot of time. Most of the fans who did participate were amateurs who didn’t have access to studios or professional recording equipment, as such post-production turned out to be an even greater challenge since the production team received audio tracks of various quality.

As the virus continues to spread worldwide, the COVID-19 outbreak has been characterized as a pandemic. The purpose of the campaign has shifted from singing for Wuhan to singing for the world.

“Now it’s really time for us to ‘heal the world.” I feel sadder and more worried day by day. I believe it is very significant for this project to come out at this time since it can send a message of unity and love to the whole world,” said Zhang.

As the pandemic worsens in countries around the globe, xenophobia and discrimination against Chinese has been on the rise. There have been increased reports of racist attacks targeting Chinese students overseas, ignoring fundamentals of the science and calling COVID-19 the “Chinese virus.”

“Any bias and discrimination that emerges amid the pandemic is stupid, meaningless and shameful. We hope to use our campaign and songs to call for love, humanity, dedication and unity, which was also Jackson’s intention while writing the song [‘Heal the World,’],” said Zhang.

Zhang also noted that there is a universality to Jackson’s songs that people can empathize with despite differences in nationality or race.

“Rather than merely considering music as a means of entertainment, we hope the images and the music in the video can wake up the kindness, nobility and desire to take action in people’s hearts. Especially during such a difficult time, music should be a universal language,” he added.