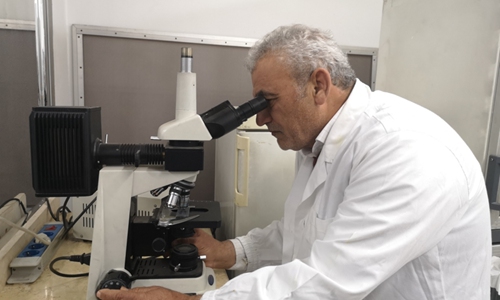 “To cope with COVID-19, every country is left with no choice but to defeat it together,” Ali Mohamed Zaki told the Global Times at his studio in Cairo, Egypt.

Zaki is an internationally renowned virologist who was the first to discover the Middle East respiratory syndrome (MERS) coronavirus.

When Zaki discovered the first MERS patient in 2012, he was working in a lab of a private hospital in Saudi Arabia. The founder of the hospital, Mr Soliman Fakeeh, attached great importance to the diagnosis of new infectious diseases.

Zaki was employed to conduct pandemic-related research since the early 1990s.

He recalled that on June 13, 2012, “patient zero” of MERS came to his hospital. The patient had serious infection symptoms with his respiratory system, which soon developed into acute pneumonia and renal failure. The patient died 11 days later.

During his hospitalization, Zaki and some experts on pulmonology and urology kept his blood and phlegm sample and numbered it “38.”

They ran tests on the sample with fluorescence immunoassay against many kinds of respiratory pathogens, but all came out negative.

In accordance with Saudi Arabian laws, Zaki handed the sample and initial results to Saudi Arabia’s Ministry of Health.

After tests with polymerase chain reaction showed negative for H1N1 influenza virus, he believed the sample contained some kind of virus, as inoculations showed the cells were clearly damaged by virus inductions.

Microscopes showed the inoculated cells fused together under the effect of the virus.

However, since the patient was already dead, only Zaki was interested in examining further. After several tests, Zaki started to believe it was a paramyxovirus, but all experiments failed. He then turned to coronavirus after remembering the damage caused by Severe Acute Respiratory Syndrome (SARS) in.

He contacted several European companies for help and cooperated with a lab in the Netherlands, and they ruled out SARS and finally discovered the MERS virus.

He said he feared that the local authorities wouldn’t like the outside world to know about the outbreak.

In September 2012, when Zaki’s research was published, he was forced to close his lab for suspected smuggling of samples across the border.

He then resigned and returned to Egypt to become a teacher, and the related patents were kept by foreign labs.

Before he handed out the sample, Zaki clearly knew what he might be facing. But he said his conscience as a doctor and scientist urged him to hold responsibility to let the public know the truth.

Zaki said that it was a small matter for him to lose job to save more lives.

Ever since he discovered the MERS, he has been very interested in coronavirus-related studies. Zaki started to notice the novel coronavirus since the beginning of 2020 when the international virology circle and global news media started to focus on it.

By the end of January, the Chinese government launched special responsive measures, which also alerted the Egyptian side.

Zaki started to receive invitations from government departments and schools for related seminars because of his expertise in coronavirus.

He believes the key measures to prevent and control such virus is to strengthen study on wild animals that are prone to become host of virus such as bats, locate viruses, and take precautions.

Zaki suggests staying on high alert for novel coronavirus as it is much sneakier, and better at adapting itself to the external environment.

Zaki said that virus is more contagious to people in a virus host-concentrated area, rather than simply a specific race.

For example, the MERS occurred mostly in the Middle East, which is closely related to the large population of camels in the region.

He once developed a MERS vaccine for camels, and that effectively reduced the chance of infection.

Zaki noticed the various rumors or even conspiracy theories on the novel coronavirus.

He said he doesn’t believe such conspiracy theories, nor will he simply negate them, as the remarks are irresponsible.

During the MERS outbreak, Zaki was falsely accused that his lab was sub-standard in terms of safety protection. But the facts and truth eventually won out, said Zaki.

Similarly, the novel coronavirus outbreak has been touted without proof as being the result of lab leak incident. This claim has drawn much attention from chaos lovers, he said.

The best weapon to strike back at the rumors is to study the virus in a scientific fashion and seek confirmation.
Newspaper headline: Cure by knowledge