Home World Iran ‘stands together’ with China and its people in combating epidemic: ambassador 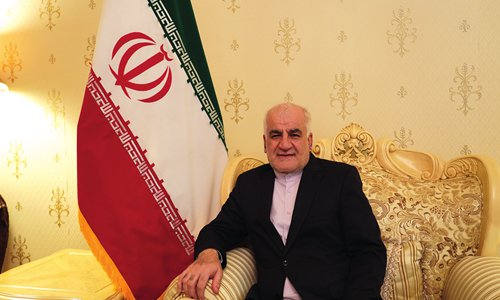 Editor’s note: On the occasion of the 41st anniversary of the founding of the Islamic Republic of Iran, Global Times reporter Xie Wenting (GT) interviewed Iran’s Ambassador to China Mohammad Keshavarzzadeh (Keshavarzzadeh) on a range of topics from the current novel coronavirus outbreak to regional and international issues.

GT: It’s reported that Iran has suspended all its flights to and from China due to coronavirus. When will Iran consider reopening the flights?

Keshavarzzadeh: No, it is not true. Mahan Air has managed to keep its weekly flights to and from China and once the limitations implemented due to coronavirus on outgoing tours from China have been removed, it will resume its routine flight schedule.

GT: How do you evaluate China’s efforts in curbing the epidemic? How do the ordinary Iranian people view China’s battle against the virus?

Keshavarzzadeh: As mentioned by a spokesperson of China’s Foreign Ministry, Iran was the first country who loudly supported and offered sympathy for the people and government of China. The government of Iran has noticed that from the early stages of the outbreak, Chinese authorities have taken broad, comprehensive and scientific measures to contain it and secure not only Chinese citizens’ health, but also foreign nationals’ health. Iran is standing with China during this hard time and is continuing to provide any help and as Minister Zarif quoted “Together we stand, my armors thine.”

Keshavarzzadeh: China’s Foreign Ministry thus far has held two briefing sessions for diplomatic missions which were very informative and effective. The fact that Deputy Foreign Minister Ma Zhaoxu has participated in briefing sessions is a reflection of the great importance being attached to the worries and questions of foreign governments’ representatives by the government of China. We also appreciate the allocation of a hotline for emergency issues by China’s foreign ministry.

GT: Iran celebrated its National Day on Tuesday. This year may be a tough year for Iran due to US sanctions. How will Iran deal with them? How do you evaluate the new Middle East plan that the US proposed?

Keshavarzzadeh: Since the founding of the Islamic Republic of Iran in 1979, Iranians have been faced with unilateral sanctions and all kinds of conspiracies aimed at overthrowing the elected government of the country by the US. In exercising its interventionist approach and in order to secure its unlawful so-called interests, they spare no time and effort to demonize Iran and smear the image of the Islamic Revolution. In pursuit of its bullying policies towards independent countries, while frustrated with all of their failed attempts, the US acted like a terrorist group. The only way out of the current situation, is for the US to abandon its delusions and start to speak with other nations with respect and resume compliance with its international obligations and remedy all damages inflicted on Iranians by imposing illegal sanctions.

The recent US proposed Plan for Middle East is highly regarded as another example of a policy of interference and support of racism. It is actually a nightmare for the region and the world rather than a true peace vision. We believe that recognizing the right to self-determination of the Palestinian people is the sole solution to this decades-long dilemma.

GT: Iran’s Foreign Ministry said earlier that it is ready to help Turkey and Syria resolve their differences over the nearly 9-year-old war in Syria. How will Iran mediate between Turkey and Syria?

Keshavarzzadeh: Our position from the beginning of the Syrian crisis has been clear and consistent. There is no military solution. We benefit from close ties with both Turkey and Syria and reiterate our readiness to facilitate dialogue between these two countries in order to ease the tensions.

GT: The US administration recently sanctioned several Chinese entities for making oil purchases in Iran. US official Brian Hook said, “the Middle East is going to be unstable,” as long as China continues to buy Iranian oil. What’s your take on it?

Keshavarzzadeh: Everybody has noticed that the US policies, especially in recent years, have not only been in violation of international norms and laws like the UN Security Council (UNSC) resolution 2231, but also try their best to force other countries to infringe upon their commitments. This addictive attitude of imposing unilateral sanctions must be rejected collectively to stop it from gaining prevalence.

GT: Under what conditions will Iran agree to bring the nuclear deal back to the table? Will negotiation with the US still be an option for Iran?

Keshavarzzadeh: It should be remembered that Iran was not the party which abandoned the negotiations. The US withdrew from a deal which was the result of 10 years of tireless multilateral diplomacy and negotiations and has been endorsed by the UNSC. In addition to that, the US has been in the business of putting ever-increasing pressure on others to violate their commitments under JCPOA and UNSC 2231 resolution. It is also worth noting that Iran is still committed to JCPOA and the steps to reduce some of its nuclear-related commitments are aimed at keeping the balance between its rights and obligations as provisioned in paragraph 36 of the deal. It has now become more evident that US President Donald Trump is only looking for “a decorative meeting” just to promote his re-election campaign.

GT: The Weibo account run by Iran’s Embassy in China is one of the most popular foreign embassies’ Weibo accounts. Who is running this account?

Keshavarzzadeh: In order to strengthen people-to-people exchanges and directly interact with netizens, we have decided to run the official account of the embassy on Weibo and Baijiahao [another online news platform]. A team comprising of Iranian and Chinese friends is supporting the embassy and Iran’s Ministry of Foreign Affairs in managing the account.