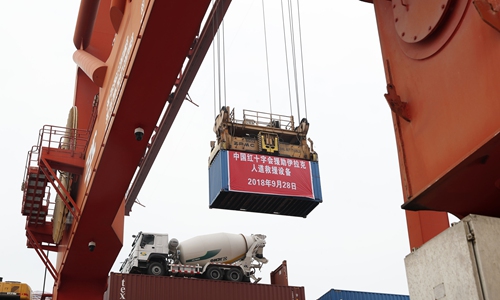 China has a long history of offering humanitarian aid to countries in the Middle East. The Red Cross Society of China gave large medical equipment to Iraq and shipped the facilities from Shekou port of Shenzhen in South China’s Guangdong Province in September 2018. Photo: CNS photo

Chinese analysts have criticized a research fellow from a think tank, which was an influential propaganda affiliate to the US Council on Foreign Relations, as “ill-intentioned” for disparaging China’s assistance in the Middle East and trying to sow discord between China and countries in the region.

London-based news website New Arab published a commentary written by Kyle Haddad-Fonda, a fellow with the Foreign Policy Association, on April 1, in which he warned that in the absence of US support in the Middle East, China is “turning the novel coronavirus crisis into an opportunity for a public relations triumph.”

He continues by adding “in the Middle East, where many countries have long counted on American aid, China’s assistance is especially noteworthy. The US has neither the ability nor the inclination to match China’s generosity.”

The Global Times reporters found a reference by the Washington-based Middle East Institute that Haddad-Fonda has served as a postdoctoral researcher at Shanghai Jiao Tong University’s Center for Middle East Peace Studies. The reference can also be found on the center’s website.

To cater to Western opinions, Haddad-Fonda hypes the pandemic situation in a globally sensitive and complicated region, and smears China to draw public attention. Although he studied in China, it does not necessarily mean he has a comprehensive understanding of China, Liu Zhongmin, a professor at the Middle East Studies Institute of Shanghai International Studies University, told the Global Times.

The US-based Foreign Policy Association (FPA) where Haddad-Fonda works for claims to be a nongovernmental organization founded in 1918 and its main mission is to “serve as a catalyst for developing awareness, understanding, and informed opinion on US foreign policy and global issues.”

However, Dan Smoot, a former FBI agent and conservative political activist, wrote in a book published by Western Islands in 1977, The Invisible Government, that FPA “is probably the most influential of all the agencies which can be shown as a propaganda affiliate of the Council on Foreign Relations in matters concerned primarily with American foreign policy.”

Laurence H. Shoup, a US author, called the Council on Foreign Relations (CFR) a think tank “dominated by Wall Street” in his book, Wall Street’s Think Tank, which was published by Monthly Review Press In 2015.

Members of CFR were quite often cited by US media on commenting China and many of them regarded China as a big threat to the US. In March 2015, CFR released a major report, alleging that “China must be defeated because it threatens to become a bigger power in the world than the US.”

US think tanks always have ideological preferences and many of their fellows are representatives of anti-China forces. As a researcher, Haddad-Fonda wrote the commentary with bias and no objectivity. He deliberately uses the pandemic to defame China and tries to drive a wedge between China and other countries, experts said. 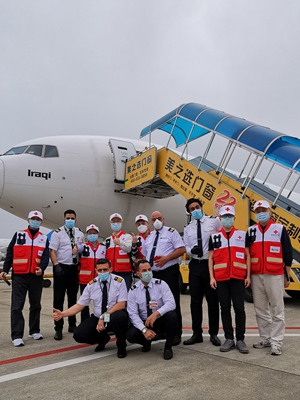 Members of the Chinese medical team dispatched to Iraq have a group photo taken with the cabin crew after arriving in Iraq in March. Photo: Courtesy of Ai Hexu

US the main reason for regional unrest

“The writer’s commentary is an over-politicized interpretation of China’s humanitarian assistance to Middle Eastern countries against the novel coronavirus. China has never assisted other countries for political purposes,” Liu told the Global Times.

The US should reflect on the war in Afghanistan, the war in Iraq, its sanctions against Iran, its interference in Syria, and its partiality on the issue of Palestine and Israel, which have harmed the region. The US is to blame for war-torn Iraq and the country’s limited medical capacity, as well as Iran’s difficulty of procuring medical supplies, Liu noted.

The spread of COVID-19 is now posing an especially severe challenge to the Middle East, where chronic wars, sanctions, famine, financial collapse and political unrest have wrecked preventive efforts against the virus. To help with local and regional battles against the coronavirus epidemic, China has dispatched many medical teams to countries in the Middle East, including Iraq and Iran, and donated medical supplies.

The US is inescapably responsible for the turmoil in the Middle East. Wars initiated by the US in the region have hindered countries’ developments in economy, healthcare and industry. Gulf states such as Kuwait have no war but are affected by a surrounding conflict-ridden environment. Weak industrial development in those countries affects prevention of the coronavirus, Li Weijian, vice president of Middle East Institute of China, told the Global Times.

Instead of using the pandemic to manipulate countries in the Middle East, as some anti-China forces have alleged, China is providing concrete help to meet the needs for pandemic prevention in the region, Li noted.

“China is not offering sudden help to the region as such assistance and cooperation between China and countries in the Middle East have existed for decades,” Li noted, “When I worked as an interpreter in Iraq 40 years ago, there was a lot of collaboration between China and the Middle East, which has been increasing and strengthening in recent years.”

Without using scientific discussions on how to stop the virus from spreading, he linked the outbreak of the virus to China’s policies in Xinjiang and quoted other peoples’ opinions to say it is a punishment for China. It showed that he is not only ill-intentioned but also lacking of dignity, Chinese experts said.

As countries in the Middle East welcomes China’s assistance, Haddad-Fonda seems to have no choice but to cite extremist dissidents and even publications issued by the terror group Islamic State to say the virus is “a soldier in God’s army” sent to punish China.

Extreme opinions do exist in the Middle East, but they do not represent everyone in the region. Haddad-Fonda specifically mentioned a few such extremist opinions to mislead people in Muslim countries and attempted to divide China and the Muslim world, Liu said.

Haddad-Fonda stressed many times in his article that the virus was from China and especially mentioned some Chinese eating dogs and snakes.

He cited the Egyptian daily newspaper Al Dostor to make the point that a number of different diseases that can be contracted from eating wild animals, especially bats and snakes, including lassa virus, Ebola virus, hantavirus, and Hendra.

“All these are conspiracy theories that aim to drive a wedge between China and countries in the Middle East. The origin of the novel coronavirus is a scientific question and should not be easily judged. The writer also mentioned anti-Chinese violence and the eating habits of some Chinese to purposely cause racial discrimination,” Liu said.

Experts reached by the Global Times on Wednesday said that any attempt to provoke dissension between China and the Middle East countries is doomed to fail as China’s assistance to the region, especially the help amid the pandemic, is always sincere and has been welcomed by these countries.

Mazen Qusaibati, head of the internal diseases department at the Ibn Al-Nafees Hospital in Syria, said that the video-conference with Chinese experts could helped Syria “save time” and “avoid mistakes” in dealing with the virus, according to the Xinhua News Agency.