Home World Half of US college students back Democratic presidential hopeful Sanders: poll 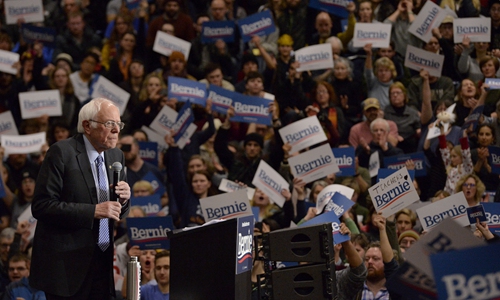 US Presidential Candidate Senator Bernie Sanders speaks at a campaign rally at Keene State College in Keene, New Hampshire on Sunday. Sanders and Pete Buttigieg locked horns in their fight for the US Democratic presidential nomination. Photo: AFP

Across the United States, full half of college students say they support Senator Bernie Sanders, who currently leads the Democratic 2020 presidential race, according to a new poll released by Chegg/College Pulse on Thursday.

“(Sanders) has increased his position. He’s now at 50 percent of college students,” Bonny Brown, Chegg’s head of research, told The Hill, a US political website.

“There is one thing that really unites them, that really worries them, and that is climate change,” Brown said. The second most important issue for college students, she added, is income inequality.

Among the group, Sanders polls strongly in every demographic because he speaks to the issues that most concern them, said Brown.

Sanders, who describes himself as a democratic socialist, has detailed policy plans to combat the issues during his campaign, together with his signature “Medicare for All” health care plan.

Senator Elizabeth Warren, also a progressive, comes the second in the poll at 18 percent, followed by entrepreneur Andrew Yang at 10 percent and former South Bend, Indiana, Mayor Pete Buttigieg at 8 percent. Yang dropped out of the race on Tuesday.

Chegg/College Pulse surveys more than 1,500 full and part-time students attending two- and four-year colleges or universities across the United States on a weekly basis. The margin of error is 3 percentage points.