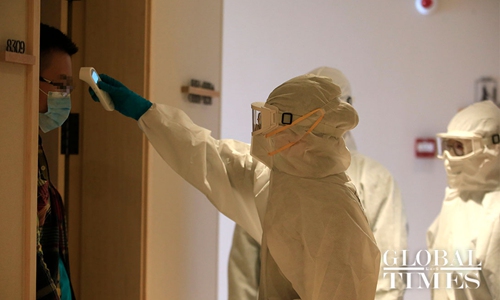 In a centralized quarantine site near Shanghai Hongqiao International Airport, medical personnel deployed by Shanghai Changning District Health Commission, have been working round the clock, despite risks of infection, for half a month, assisting quarantined inbound travelers and helping to identify possible COVID-19 carriers. Photo: Yang Hui/GT

Chinese public urged the whole country to adopt full quarantine for passengers from abroad, saying this can address possible local infections and ensure residents’ safety, amid an increasing number of imported cases of COVID-19.

Following the example of Beijing, the Shanghai government announced Thursday afternoon that all people from abroad who enter the city have to undergo 14-day quarantine observation from Thursday after a woman travelled from the US to Kunming, Southwest China’s Yunan Province via Shanghai and didn’t go into quarantine upon entering the country. She was later confirmed to have been infected with the coronavirus.

The woman, 70, returned to Kunming via Shanghai from the US on March 15. Her body temperature was normal when entering the country. She flew on March 17 to Kunming and her temperature was again normal upon arrival. She was then sent to a centralized quarantine point and tested negative for the virus on March 18, chinanews.com reported.

The woman wore surgical masks throughout the trip.

However, she was confirmed to have been infected with the virus after she tested positive on March 25.

Close contacts of the patient have been tracked and managed as required.

The case triggered public fear that the imported cases could spread infections as China is resuming work and some social exchanges have restarted.

A public health expert, who requested anonymity, told the Global Times on Thursday that the whole country should follow Beijing and conduct full centralized quarantine inspection for all passengers from abroad, which could avoid an imported epidemic from spreading.

A further 67 imported cases from abroad were confirmed in China on Wednesday, coming to a total of 541, China’s National Health Commission said on Thursday.