Home In-Depth Doctors at Wuhan ICU rush to save lives as China moves one... 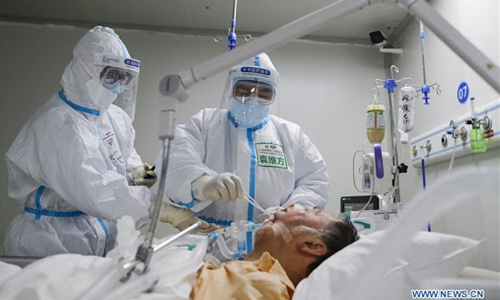 Some of China’s best doctors in respiratory and infectious diseases are still in Wuhan tasked with treating COVID-19 patients in critical conditions, trying their best to save more lives as the nation is close to the final stage to cure or discharge the remaining patients.

Although the majority of China’s COVID-19 patients have been discharged from hospitals, 1,190 are still receiving treatment, while 189 patients remain in critical condition as of Tuesday. Wuhan still has 445 confirmed cases, including 155 critical cases, according to the National Health Commission.

It is in remarkable contrast with just a months ago when Hubei Province alone reported more than 60,000 patients, a miniature exemplifying the achievement of the whole nation in the costly COVID-19 fight.

Cao Zhaolong, 56, came to aid Wuhan from Beijing in February along with more than 130 colleagues. He was responsible for treating critical patients at an intensive care ward with 50 beds at the Sino French New City Branch of Wuhan Tongji Hospital.

The critically ill patients receiving treatment are those who have been saved by invasive ventilators and ECMO, but pulmonary fibrosis still remain in their lungs. They are being treated with oxygen therapy, Cao said.

Some have shown stable symptoms, but for those with serious diseases such as kidney failure and heart disease, they require treatment from multiple departments.

As there isn’t a specific drug to treat COVID-19, so those in critical condition need to be clinically treated based on their symptoms, Cao said.

By April 5, the ICU ward where Cao works had received 101 patients, of whom 47 were severe and 26 were critically ill, ranging in ages from 18 to 88. Among them, 81 patients had been discharged from the hospital and four died. Three patients were transferred to other wards for dialysis due to chronic renal failure and six were transferred to other ICU wards. Seven patients received treatment for other diseases in the intermediate ward.

The COVID-19 fatality rate at Sino French New City Branch dropped from 6 percent to 2.8 percent since they received support from doctors coming from outside of Wuhan.

Most of the critically ill patients with COVID-19 are elderly patients with weak immunity. Invasive treatment with machines brings them high risk of infection. Some children of elderly patients do not want their parents to suffer from that pain.
The use of ECMO requires a high accurate dose of anticoagulants. If the dose is insufficient, the blood will clot and the tube of machine will be blocked. If the dose goes over, the patient will suffer bleeding.

Some severe patients will still have pulmonary fibrosis after recovery from COVID-19. Their oxygen saturation will drop during movement, leading to breathing difficulties.
Cao advises them to be inactive for three months after discharge. The symptoms of pulmonary fibrosis are reversible, and after two or three years of cultivation, it is estimated that the lungs can be restored to good health.

Cao said he has seen too many deaths during his career as an expert in intensive medical care, adding that he treats every patient with utmost care and none of those who died after his treatment passed away with regrets.

There were four critical patients who died in his ward in Wuhan. They were stable during the day on the non-invasive ventilation, but suddenly died at night. Cao said he felt very helpless.

All four were seriously ill in the early stages of the epidemic and died in early February. Cao regretted that he didn’t come to Wuhan earlier to support these patients, otherwise they may have a better chance, he believes.

As a member of the national critical disease emergency expert team, Cao has been involved in the treatment of major respiratory infectious diseases such as SARS in 2003 and H1N1 in 2009.

During the SARS epidemic, patients received excessive hormone therapy, which left a sequelae of femoral head necrosis. But with COVID-19 treatments, hormones are used with caution, and there won’t be any joint sequelae, Cao said.

“I accumulated a lot of experience in actual combat against major respiratory diseases, so I was determined to aid Wuhan,” Cao said.

Our country, government, and hospitals accumulated experience fighting SARS, which helped in the prevention and control of COVID-19, he said.

Many hospitals have established the respiratory and critical diseases discipline after SARS, which can diagnose and treat both respiratory and internal diseases, as well as train medical and nursing talent. They have become the main force in the battle against COVID-19, Cao explained.

Facing life and death in the ICU, COVID-19 patients’ longing for life has always touched Cao, and the spiritual power is actually important for recovery, he said.

The life of a male patient in his 40s was at stake when he was sent to the hospital. Cao and his colleagues even discussed whether to use an invasive ventilator or ECMO to save him. However, given the risks to his condition, he was treated with modest oxygen doses.

To everyone’s surprise, the patient recovered slowly. “I must get out alive. I have three children, waiting for their dad,” the patient told Cao.

The man lost his father to the virus, and his mother was also infected. His wife experienced mild symptoms and was treated at the Fangcang makeshift hospital and later cured.

To maintain a positive attitude, the man watched short videos that featured humorous and positive content on Douyin and avoided watching depressing videos related to the epidemic. This is not easy to do in Wuhan, which is filled with sad news on the outbreak, Cao said.

When reviewing the case, Cao and his colleagues believed that spiritual relief helped the patient more than medication.

Doctors are also careful to convey optimism in their interactions with patients.

Cao can communicate with patients in their local dialect, as his hometown is Suizhou, in Hubei Province, and the patients have also been willing to talk to Cao.

“Many couples, or mother and sons are in our ward, asking me about their family’s situation. I would tell them how their families were recovering and encouraged them to have confidence to fight the disease,” Cao said, adding that “they will be happy, more willing to cooperate with the treatment, and look forward to the recovery and discharge to reunite with their families.”

Expectations in the young

There are 12,000 medical workers who born after 1990 or 2000 aiding Wuhan, Ding Xiangyang, deputy secretary-general of the State Council said at a press conference, Chinanews.com reported.

Cao was moved by the responsibility and courage demonstrated by young Chinese medical staff.

Cao heard that some of them wrote a will to their friends before going to Wuhan. If they died in Wuhan, their friends were to give the will to their parents. Many doctors have no experience treating infectious diseases, and they suffer from fear while aiding Wuhan.

Young medical staff has no experience in dealing with major health problems. They were children during SARS in 2003. Most have only been in the workforce for a few years, however, that doesn’t mean they have less responsibility as older doctors, Cao said.

Cao understands that some nurses want to change careers because of the intensity, risks, and low salary.

However, he loves his career and has been a doctor for over 30 years, so he can’t quit. When a critically ill patient has been cured, the sense of accomplishment is unmatched by other professions, he noted.

As the country fights the epidemic, medical personnel have been pushed to a high social position.

At least 1,067 scenic spots in China, covering 30 provinces and 195 cities, have implemented free travel for medical workers, according to People’s Daily.

The children of medical staff fighting against COVID-19 who are identified as martyrs get 20 points for the college entrance examination in Northeast China’s Heilongjiang Province, the provincial government announced on March 19.

Cao wishes the high respects toward medical workers in the society last longer. It is hoped that this outbreak will make the country pay more attention to medical education and the construction and cultivation of a treatment system for infectious diseases. Doctors’ pay and social status can be improved to attract more talents to study medicine, he noted.