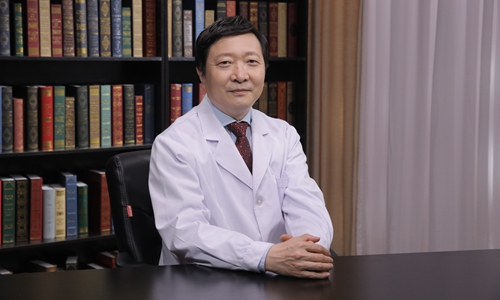 Less than half a month after recovering from novel coronavirus pneumonia, Wang Guangfa, a leading Chinese respiratory expert at Peking University First Hospital in Beijing, was back in the fight against the epidemic.

His name became widely searched since the initial outbreak of the epidemic as he has been the first coronavirus-infected and cured expert, as well as the fifth cured patient in China. He was among the first batch of national medical experts dispatched to Wuhan  in early January.

After being discharged from the hospital on January 30, Wang soon devoted himself back to work, shuttling between his hospital and National Health Commission meetings. He keeps busy with answering calls from those who are concerned about the virus in this national campaign. Wang stays updated on the news, statistics and hygienic tips around the virus on his Sina Weibo account – which now has 4.1 million followers – almost every day during short breaks.

“If it is needed, I can be the first go to Wuhan [again] to cooperate with other medical staff on the frontline, and I have submitted this petition to the relevant departments,” Wang told the Global Times.

“As a rehabilitator, I fully understand the psychological struggles and fluctuations that patients experience throughout treatment. But I hope all patients can be strong and maintain confidence to work together with medical workers, because a healthy mentality is the first step to overcome this troublesome virus,” Wang said.

Wang recently expressed to the media his willingness to donate plasma as a recovered patient. The plasma of the recovered patients has worked in a few cases in clinical trials and may be effective in treating the novel coronavirus.

“In particular, plasma therapy, a traditional treatment option for some infectious diseases, may work in critically ill patients contracting novel coronavirus,” Wang told the Global Times. “But it is a must to ensure the hygiene and safety in the collection of blood as improper plasma treatment may pose a risk of secondary transmission of infectious disease.”

The day Wang was discharged from hospital, many netizens left messages on Sina Weibo offering their blessings and prayers, saying that Wang’s recovery ignited the hope of many infected patients.

Under the recommendation of his doctor, Wang attempted HIV drugs that combines lopinavir with a low dose of ritonavir to fight against the novel coronavirus. The treatment was a success. With mild symptoms, Wang’s fever went down after only two days at the hospital.

“In the initial media interviews after my discharge, I was hesitant to disclose the name of the drug I was using to the public for fear that it would be misleading as the drug had not yet been proven by researchers to work on every patient,” Wang told the Global Times. “I do not encourage the patients to use drugs blindly over the fear that adverse reactions of drugs may further damage patients’ health when the efficacy is unknown.”

“But soon I was thinking that disclosing the drugs might give medical researchers a new treatment idea and give other patients more options and higher chance to combat the deadly coronavirus,” he said.

But beyond the praise for Wang, there were sharp critiques from some, mostly from Hong Kong media, taunting him over his previous remarks that the “disease was preventable and controllable.”

“Even a national expert can be infected, how can we believe the epidemic is preventable?” Many have questioned his optimistic message to the public and doubted his credibility.

Wang defended his earlier comments on the virus, stressing that “This epidemic is being prevented and controlled currently through various strengthened measures by the government,” and telling he meant to warn public not to overly panic while taking strict personal precautions.

Wang believes that controlling the population in and out of Wuhan is an important measure to control the source of infection. If the problems in Wuhan are resolved, the pressures and risks in other places will be greatly reduced.

“As long as measures are in place at all levels, the disease is preventable and controllable,” said Wang. He stressed tolerance and understanding instead for the public’s heated debate in earlier days when the virus was mysterious.

The panic over the outbreak is usually amplified on the internet, but rational judgement is even more important at this difficult time in the national fight against the virus, Wang told the Global Times.

He remembers the gloomy atmosphere in the empty halls of hospitals during the SARS epidemic in 2003, and the images of rapidly deteriorating lungs on CT scans that he recalls gave him chills.

“Although I was mentally prepared for every battle, it was a little frustrating me to learned that I tested positive for coronavirus. This is the first time I’ve been infected on the frontline, despite previous exposure to the more contagious H1N1 swine flu and the more deadly plague,” Wang said, recalling the day he was confirmed with the novel coronavirus.

He speculated he contracted the illness from checking patients in a crowded fever clinic where the coronavirus was highly concentrated.

But he did not want to be overpraised for fighting the virus, telling the Global Times that he regards himself as a servant of people who should devote all of his expertise to conquering the national tragedy.
Newspaper headline: Back to frontline