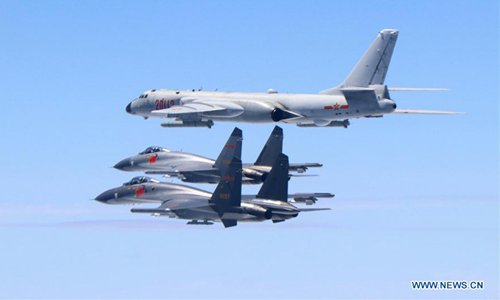 The Chinese People’s Liberation Army (PLA) reportedly held military drills featuring warplanes near the island of Taiwan on Friday, and such drills, having taken place at least four times since the traditional Spring Festival holiday in January, have become regular and are now a part of military struggle preparations against the island, mainland experts said on Friday.

The PLA warplanes entered the Western Pacific Ocean through the Bashi Channel, then returned to base along the same route they came from, reports from the island said.

Song Zhongping, a mainland military expert and TV commentator, told the Global Times on Friday that the drills were a part of preparations for the potential military struggle against the island of Taiwan, and such drills have become regular and routine.

After the traditional Spring Festival holiday in late January, the PLA conducted a combat-readiness patrol mission featuring warships and warplanes on February 9, joint exercises on February 10, and “rare” warplane nighttime exercises on March 16, all near the island of Taiwan, despite the novel coronavirus (COVID-19) outbreak.

Song said he expects the PLA to gradually hold larger and more frequent drills, and for the drills to become more targeted and have more deterrence, such as decapitation strikes against secessionist forces and area denial operations against foreign intervention.

The exercises need to let Taiwan secessionists know that the support of foreign forces is useless and also let foreign forces understand that the PLA possesses the ability and determination to solve the Taiwan question, Song said.

The drills on Friday also came after the US recently signed the Taiwan Allies International Protection and Enhancement Initiative (TAIPEI) Act into law, which allows the US to reduce, expand or terminate economic and diplomatic engagements with nations that take actions to undermine Taiwan, and help Taiwan island gain participation in international organizations, either as a member or an observer, and provide weapons to the island.

Zhu Fenglian, a spokesperson for the State Council Taiwan Affairs Office, said following the signing of the US act on March 26 that China’s national reunification and rejuvenation will not be stopped by any force.