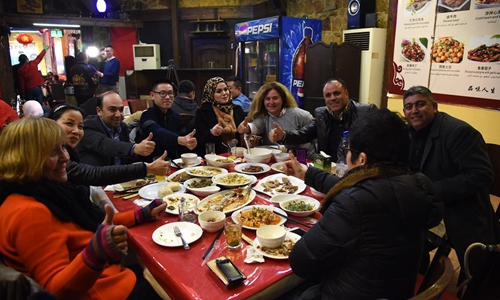 Syrian and Chinese people are seen celebrating the Chinese New Year at a Chinese restaurant in the capital Damascus on Jan. 24, 2020. (Xinhua/Ammar Safarjalani)

On the eve of the Chinese new year, some Syrians and their Chinese friends gathered at a Chinese restaurant in Damascus. They exchanged congratulations at tables where delicious Chinese food was served.

The place, called the Peace Restaurant, is like a venue for the gathering of Syria-based Chinese people and their Syrian friends, who can speak Chinese or know some Chinese words.

Many Syrian customers in the restaurant knew that “xin nian kuai le” means “happy new year” and were also expert in ordering Chinese food. On many tables the Jiaozi dumplings, a traditional food for the Chinese new year, were served.

The Chinese lunar new year, or the Spring Festival, falls on Jan. 25 this year.

Some Syrian customers at the restaurant said the Chinese new year tradition resembles the Syrian tradition in a way, for example, people wear new clothes and give children some cash.

When the “Chun Wan”(the Chinese Spring Festival Gala) was playing on the TV, they started wishing each other happiness and a new year of success and fulfillment.

Xia Kui, manager of the restaurant, told Xinhua that he is happy to be able to host some Chinese people who are unable, due to work responsibilities, to return home to celebrate the festival with families.

He said he feels safe and respected in Syria “as China is stronger nowadays, we get more respect and help outside our country.”

Abir Kharfan, a pharmacist, said this is her first time celebrating the Chinese New Year with her Chinese friends in Damascus, and noted it was very impressive and the Chinese traditions are similar to the Arab ones.

Her friend, Amer Bikdash, spoke Chinese fluently and told Xinhua he has been to China several times and it has become part of his life to celebrate Chinese festivals as a member of the Syrian-Chinese Businessmen Council.

“I love the way money is put in a red envelope and given to someone as a gift at the new year time,” he said.

Haytham Qahwaji, a Syrian businessman, said he is happy to celebrate the Spring Festival with Chinese friends in Damascus.

“Truly the Chinese people are so nice. They are so close to us culturally,” he said.

Hussam Hasan, head of the news department in Sama TV, told Xinhua that his channel is interested in the Spring Festival Gala.

“Our interest in the Gala this year comes from our keenness to get the Syrian people to know more about the Chinese culture,” he remarked.