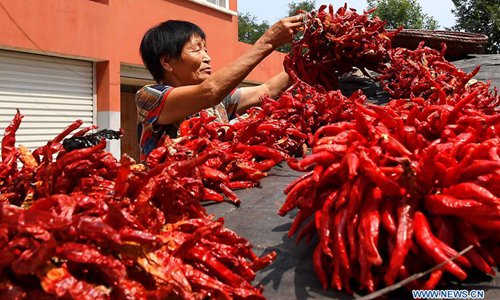 A resident dries hot peppers in Maxinggou Village in Xin’an County, central China’s Henan Province, Aug. 29, 2018. Henan is an agricultural province with a large population. In recent years, the province has implemented the country’s rural revitalization strategy and moved toward a comprehensive well-off society. (Xinhua/Li An)

The just-concluded annual Central Economic Work Conference has sent signals nationwide on mobilizing people to realize the goal of building a moderately prosperous society in all aspects and achieve its first centenary goal in 2020. Many people and experts shared their prospects for life in a well-off society and confidence in overcoming problems in the process.

“Xiaokang” or “moderately prosperous society” has become a buzzword in China. The 18th National Congress of the Communist Party of China (CPC) in 2012 proposed the idea of completing “the building of a moderately prosperous society in all respects” in 2020, with doubling China’s 2010 levels of GDP and per capita income for urban and rural residents as one of the main criteria.

The annual Central Economic Work Conference, a closed-door gathering of top leaders and policymakers held from Tuesday to Thursday, set goals for 2020 on making sure the building of a moderately prosperous society is achieved and gets the approval of the people.

People’s Daily overseas edition released an article on Friday, saying that China has favorable conditions to achieve the 2020 goals, including a solid social and economic basis – people’s average life span of 77 years old, the Engel coefficient of 28.4 percent, the rural-urban disparity of less than 3 percent and the national income per capita reaching $9,732 and surpassing the level of middle-income countries.

“At the end of 2019, the annual Central Economic Work Conference sent mobilizing signals in facing of the coming 2020 to remind us that our dream is near at hand,” read the article.

“Moderately prosperous society means the number of middle-income families in China will increase, and the GDP and per capita income for urban and rural residents will be improved with a better social insurance system. Society will also better adapt to potential economic setbacks,” Zhang Yiwu, a Peking University professor, told the Global Times.

Chinese people from different social walks of life also shared their wishes for a new year and their prospects of living in the moderately prosperous society.

A 50-year-old resident surnamed Li from East China’s Fujian Province said that his wish for the moderately prosperous society is that he could have two overseas visits in a year.

A white collar working in Beijing surnamed Chen told the Global Times that he hopes China will have more maglev trains with the speed of 600 kilometers per hour in 2020, which will shorten the time of going back to his hometown in Central China’s Henan from four hours to two hours.

A young man working in Beijing told the Global Times that he hopes the government could put forward policies to regulate and control the housing prices. A villager takes care of her baby in front of her new house at the Datong Township in Tajik Autonomous County of Taxkorgan, Northwest China’s Xinjiang Uyghur Autonomous Region on June 19, 2019. A series of housing projects in 22 impoverished counties in southern Xinjiang have benefited around 396,100 households since 2018, not only providing better homes for those who once lived in shabby residences but also boosting their source of livelihood.

Problems to be solved

“China has already built a basic-level moderately prosperous society at the end of 2018. The next crucial step is to eradicate poverty in 2020 and let all people in China, especially those living in remote areas, share the fruits of development,” Cong Yi, a professor at the Tianjin University of Finance and Economics, told the Global Times.

China has a remarkable record of lifting about 700 million people out of poverty in nearly 40 years since reform and opening-up began, a figure that represents about 70 percent of global poverty eradication during the period.

By the end of this year, more than 90 percent of impoverished counties in the country will be relieved, and about 95 percent of the poor population will be lifted out of poverty, said the People’s Daily.

Rebiyemu Mehmet has worked in the Cool Camel Walnut Company in Wushi county, Aksu of Xinjiang Uyghur Autonomous Region for three months. She can peel around 20 kilograms of walnuts a day and earns at least 1,500 yuan a month. She said that she is very satisfied and grateful now. Her family income has reached 24,000 yuan this year.

Rebiyemu used to farm and herd sheep at home and the income of her family was very low. The family of five shook off poverty in 2017.

“In 2020, I hope my salary could increase, our company could develop and family in harmony,” Rebiyenu told the Global Times on Friday. She added that she does not have any worries to be solved, as “the government has arranged everything well.”

The country’s target to relieve poverty has entered a critical period in 2019, though it is a tough battle – the remaining 5 percent of the poor will be lifted out of poverty in 2020. Social factors such as inequality of education and medical resources are major reasons to cause poverty in the country and that would be addressed in the next year by more financial support, Cong said.

“There are few problems to be solved in the process of building the moderately prosperous society, including improving the modern market economy and pushing forward the economic restructuring in China,” Bai Ming, a research fellow at the Chinese Academy of International Trade and Economic Cooperation, told the Global Times on Friday.