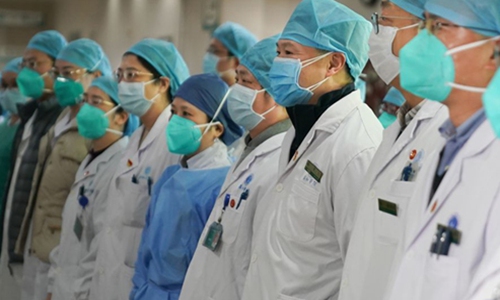 Medical staffs swear in as members of “assault team” in the fight against the novel coronavirus-related pneumonia in a hospital in Wuhan, central China’s Hubei Province, Jan. 22, 2020. (Xinhua/Cheng Min)

The novel coronavirus pneumonia (COVID-19), which started in Wuhan, Central China’s Hubei Province at the end of 2019, soon spread to other parts of China and even to other countries and regions. The World Health Organization (WHO) on January 30 announced the epidemic a public health emergency of international concern. The international community has offered sympathy and support to China, which is all in to fight the outbreak. Chinese people, under the strong leadership of the Communist Party of China, are striving to win this battle against COVID-19. Regrettably, certain Western media outlets and think tanks, disregarding the facts, are exploiting this crisis to accuse China of “violating human rights.”

To contain the epidemic, the Wuhan government adopted measures to restrict residents’ movements, but those media outlets and think tanks claimed that the government imposed a travel lockdown in Wuhan and adjoining areas, blaming the Wuhan government’s measures, including shutting down outbound channels, halting transportation in downtown areas, essentially pinning more than 56 million residents, leading to a shortage of medical supplies and other life necessities.

The rhetoric sounds moral. However, it is in fact maliciously inhumane.

At that time, the government already concluded that COVID-19 can be transmitted between people. In the face of a massive pandemic, what should the government do? The only choice is to cut off transmission channels as soon as possible. Anyone can understand this. Those Western forces rushed to link “restricting movement of residents of Wuhan and adjoining areas” to “government abusing civil rights.” They are simply lying.

After defeating SARS in 2003, the Standing Committee of the National People’s Congress issued the Emergency Response Law of the People’s Republic of China in 2007 based on the unpredictability of emergencies. The law touches upon natural disasters, accidental disasters, public health incidents or social safety incidents.

When it comes to how to cope with public health emergencies of international concern (PHEIC) like the outbreak of COVID-19, the law stipulates clearly what to do. According to the second clause of the law’s article 49, “Controlling promptly the danger sources, marking the danger areas, blockading the danger places, demarcating the cordoned areas, implementing traffic controls and taking other control measures” can be adopted after the emergency occurs. “The danger sources” refer to the virus in the case of the current epidemic.

As the coronavirus outbreak quickly spread, control measures across the city is a must. As for how to control, the fourth clause of article 49 of the Emergency Response Law stipulates that “shutting down or restricting the use of relevant places, terminating the activities with a high density of people or production or business operation activities likely to cause the expansion of damage, and taking other protective measures.”

Clause three of the article stipulates that “blockading the relevant places and roads, examining the identity certificates of persons on the spot, and restricting the activities in the relevant public places.”

The law has very clear regulations. When an emergency takes place, it is necessary that people’s rights are restrained. This is common sense.

The measures taken by the Wuhan government were not only abiding by the law, but were also righteous based on scientific judgment.

We have to admit that in the wake of the abrupt outbreak of such an epidemic, any existing mechanism needs an adjustment and coordination process. No matter the medical system or other supply-related systems, they may not be able to match the situation in a short time.

However, some ill-intentioned think tanks claimed that China’s medical institutions and professionals are unable to cope with this large-scale epidemic and that the Chinese government intruded the right of health of patients that led to patients being kept out of the door and did not make sure all infected people could get due treatment.

In fact, if such an outbreak happens in any country, problems such as lack of materials, inadequate medical equipment, and shortage of doctors will happen. The preventive measures taken by the Chinese government should not be scolded but praised.

During the process, people can see the strong cohesion of Chinese society and a government that is courageous, resolute and responsible.

WHO Director-General Tedros Adhanom Ghebreyesus on January 30 praised China for the “extraordinary steps” the Chinese government has taken to prevent the export of the epidemic.

“For that, China deserves our gratitude and respect,” he said. If it were not for the efforts of the Chinese government, the world could have seen more cases outside China and probably deaths, the director general noted.

Emergences, especially public health emergences, are a common challenge facing all human beings. Any country cannot deal with it alone.

German sociologist Ulrich Beck, in his 1986 book Risk Society: Towards a New Modernity, for the first time used the notion of “risk society” to describe the highly developed modern society. He reflected upon the growing risks since the emergence of modernity.

With the world becoming flat, risks have been everywhere. What the international community should do now is to be united, stick to the vision of a community of shared future for mankind, jointly tackle the challenge brought about by the novel coronavirus, and safeguard life, security and health of all people around the world.

The author is executive director of the Human Rights Research Institute, Southwest University of Political Science and Law. opinion@globaltimes.com.cn