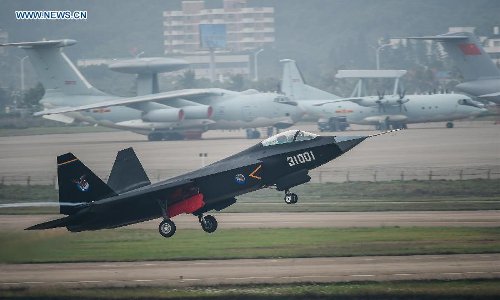 China is developing a new type of fighter jet, according to the country’s top aircraft design institutes on Thursday. Military observers predict, based on publicly available information, that the aircraft will be stealth-capable and feature the significant use of advanced composite materials.

In 2018, the structure department of the Aviation Industry Corporation of China (AVIC) Shenyang Aircraft Design and Research Institute and the arms project department of the AVIC Manufacturing Technology Institute jointly established a team codenamed “JJ” with the aim of developing a new type of fighter jet, according to an article released on both institutes’ public WeChat accounts this week.

The joint-development project was first planned in June 2018 and commenced with an opening ceremony in September 2018. The JJ team submitted an illustration of a test piece in November 2019, according to the article.

The article did not elaborate on the name or specifics of the new fighter jet, but it provided a photo which suggests the JJ team might include a smaller group focused on the development of an S-shaped air duct.

S-shaped air ducts are usually found in stealth aircraft as they obscure the engine from hostile radar, a military expert who asked to remain anonymous told the Global Times on Friday.

Three groups under the JJ team received awards during a commendation ceremony held on Tuesday, the article read. Two of the groups developed composite materials for the entire structure and integrated metal inlet, while the other preliminarily demonstrated a type of advanced material.

“The team has completed the cross-phase development of the new fighter jet. [We] have used innovation and realized a technical breakthrough for the body’s design and manufacturing,” said Xiao Shan, one of the awarded researchers, according to the article.

AVIC’s Shenyang branch is known for developing a number of Chinese fighter jets including the J-11, the J-16, and in particular the J-15 carrier-based fighter jet. It also designed China’s second stealth aircraft following the J-20, namely the FC-31, which did not enter Chinese military service and became a made-for-export product.

Some military observers have speculated that the new fighter jet could be an upgraded, domestic version of the FC-31, while others predict it could be an entirely different aircraft.