A view of the Australian cruise ship Greg Mortimer and a ship of the Uruguayan Navy off the port of Montevideo on Monday Photo: AFP 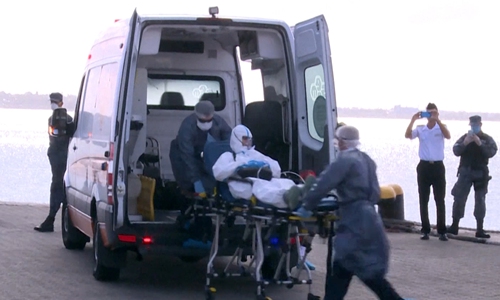 Uruguay’s public health ministry said a total of six passengers and crew members with “life-threatening” illness had been taken off the Greg Mortimer for treatment to date, but the rest of more than 200 passengers and crew remain stranded on the vessel.

Its plight is the latest affecting the global cruise industry, which has seen vessels refused entry to ports and others locked down after new coronavirus cases were confirmed onboard during the pandemic.

The 104-meter Greg Mortimer was being battered by gale-force winds as it lay at anchor in the Rio de la Plata about 24 kilometers off Montevideo port on Monday.

The state of the art cruise ship, built in 2019,  was on a voyage to Antarctica and South Georgia organized by Australian tour company Aurora Expeditions, leaving the Argentine port of Ushuaia on March 15.

The most seriously ill people were taken off the ship in stages throughout last week, helped onto a dock in Montevideo port by doctors in biohazard suits as the ship remained offshore.

A woman, breathing from an oxygen bottle carried by a doctor, was helped off a Uruguayan naval launch onto a stretcher on Friday, she too dressed in biohazard gear. Another person was brought ashore on Sunday night, wheeled to a waiting ambulance.

Aurora said 81 passengers and crew had tested positive for COVID-19 after being assessed by a team of 16 Uruguayan infectious disease specialists who were ferried out to the ship early Sunday.

But Uruguayan officials said that figure could rise, pending the results of a further 90 tests. About 45 people have tested negative.

“We know that there is a relatively high percentage of infected people but only six required to be transferred to Montevideo hospitals because they were at risk,” Uruguay’s Foreign Minister Ernesto Talvi told local Channel 10 news.

Uruguay was evaluating the creation of a “humanitarian corridor” to allow “non carriers of the coronavirus, those who are asymptomatic or with mild symptoms” to be flown home, he said.

“We are in talks with the Australian government to have this flight organized as quickly as possible,” said Talvi.

The passengers are mostly from Australia, Britain and New Zealand.

Karina Rando, a doctor who coordinated the offshore testing mission, told reporters the monitoring of positive patients could now be done remotely, as they had been given mobile phone numbers to call if their symptoms worsened.

“There are many patients over the age of 70, some of them have comorbidities, heart and lung diseases. Those patients can relapse tomorrow although we have seen them to be well today,” she added.

One of the doctors who boarded the ship said the high infection rate could be due to asymptomatic people being isolated among the healthy.

“When we opened the doors of the cabins we had people who were negative with patients who were positive,” Sebastian Yancev told Uruguay’s Canal 4 TV.

Given the closed environment of the cabins, “we already assumed that although these people were negative, the possibility they will develop symptoms is extremely high.”

Yancev said the initial source of contagion was likely the port of Ushuaia, a starting point for many Antarctic cruises, where the ship’s crew had shore leave.

“It seems the crew in Ushuaia had a break. They themselves presume it could have been at that time, because in Ushuaia there is a lot of transfer of passengers of different nationalities to different ships.”

Aurora said it had begun the “extraordinarily complicated” task of repatriating passengers, as most airlines had stopped flying “and access to charter planes is difficult.”

This would require passengers to disembark in three groups, those who had tested negative for COVID-19 and were well, those who were positive but either recovering or with vague symptoms and those who are ill.

“We are confident that group one, well people who have tested negative, will be able to disembark and leave,” the company said in a statement Monday.

The company said it was seeking the assistance of the Australian government for help with those who were asymptomatic or who had only mild symptoms.

For those who were ill, the company said, “We are working with the Uruguayan Health Ministry and its medical director to develop the best plan to have them cared for and returned to their home countries as soon as their health allows.”